You are here: Home / Media

WHAT IS CLIVE GENERAL STORE AND MUSEUM?

Swanson Park is the original city center of the Clive community that began as a rural railroad stop. The park campus includes Swanson General Store,  a caboose, and the original Clive depot

Keeping the history of Clive present for today’s generation to learn from the past and to guide us into the future.

Sciena Swanson moved to the community that is now Clive in 1911. A widow and single parent, she built a house that became a general store. Sciena and her children operated Swanson’s General Store until 1929. The store also served as the community Post Office from 1912 to 1929. Being a post office made the General Store a popular community gathering place.

A narrow gauge train ran from Des Moines and stopped at the community starting about 1882. It was replaced by a standard gauge railway a decade or so later. The passenger commuter service took workers, shoppers and high school students to and from Des Moines daily.

A reconstruction of the RR depot that was on the South Side of Swanson Blvd. was built by Ed Emory.

A railroad caboose was donated by the Milwaukee Railroad, about 1991-92, and is a fun place for children and railroad history buffs to play or study. See the Gallery page for pictures.

Scennia’s daughter, Mildred Swanson, gifted a fund before 1991 probably with the intent that it be used to maintain the family property. There were no restrictions on the funds so the City was responsible for their use.

In 1988, several concerned citizens of Clive met and discussed the fate of the railroad depot located at 86th and University Blvd. With this discussion, a historical society was formed and Articles of Incorporation were drafted and filed with the Secretary of State in early 1989. In October of 1990, the Historical Society’s Board of Directors met and adopted By-laws for the society.

Preservation of Clive’s history and the restoration of the Clive Depot and Swanson General Store in Swanson Memorial Park were the first projects completed. They are available for education and interpretation of the Clive “community.” All the structures are ready for artifacts indicative of the late 1800s to late 1920s.

“This a fun, hidden jewel of a park. Picnic tables in the shade of a walnut tree. Free Wi-Fi. And several sandwich places nearby to get a quick picnic lunch.”

“My kids love playing in the park and exploring the Caboose. Great fun!”

“My professional group can meet here for an out-of-the-ordinary venue. And, it’s free!”

“My 6th grade daughter is working on a railroad history project and I just wanted to say thanks for making your website railroad page available. We’ve been looking for resources to cite and include, and your page has been a big help!”

» The campus is available for community groups to organize and present events.

» Clive Recreation and Clive Library are planning events at the Campus for the Spring / Summer seasons of 2017.

Past, present, future; these are the elements that move the Clive Community forward as together we shape our future. Clive Historical Society (CHS) promotes the collaborative application of time, talent, and skills together with ongoing dialogue to help guide the growth of our city. Engage in CHS events to help shape the future of Clive. History makes a difference in defining who we will be in the future. You are an important part of that future. Be a force for Clive as we change naturally. 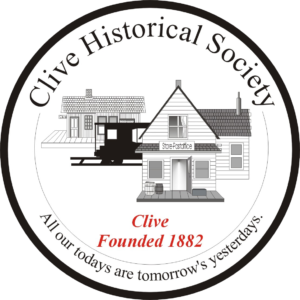