The Louisiana Purchase in 1803 led the way for Iowa to become a state in 1846. Before that time, the land was prairie where the buffalo roamed and many native Americans including the Iowa, Sac and Mesquaki lived and hunted.

In 1870, the area now known as Clive was part of the Flynn Farm (1870). Land in the Clive area was platted in 1880 and the first plat in the city was filed on January 18, 1882. Development in this area was spearheaded by Des Moines businessmen Jefferson Polk and Frederick Hubbell who formed the Union Land Company, “to purchase coal lands, stone quarries, land for town sites and land generally in the state of Iowa.” They and other businessmen worked to develop Iowa’s railway system between 1881 and 1882. The St. Louis-Des Moines Northern Railway (a narrow gauge line) laid tracks from Des Moines to Clive and on to Waukee and eventually extending to Panora and Fonda with a branch running from Clive to Boone. 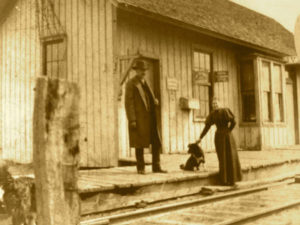 In 1881, the area was the site of the Gibson Coal Company coal mines which extended from the present 69th Street to 78th Street. Although most of the area residents were farmers, it was the railroads that fostered the development of communities and towns. The first postmaster at the Clive Depot was Thomas Neff, who began his duties on February 8, 1882. About 20 families made up the community.

Property was bought and businesses were built near the depot. A general store was one of the first businesses to open (probably in the late 1880s, but the exact date is not known) directly across from the depot. In the early 1900s, there were two streets in Clive – Broad Street which ran north and south (later known as Clive Road and 86th Street), and Harbach (the same section of Harbach where the Dymond Public Safety Center is now located). 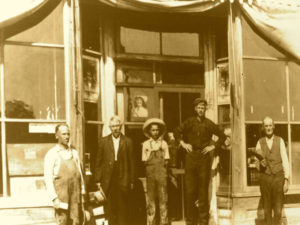 At least two general stores and a blacksmith shop were located directly across the street from the depot. By 1922-1923, the population of the community of Clive was about 150 people. Clive would remain a small community for several years.

Through the years the post office moved from the depot to each of the general stores and finally to a building of its own.

On August 18, 1956, Clive officially became a city after there had been some discussion by West Des Moines to annex Clive. At the time, Clive covered three square miles. George Lundberg was the first mayor of Clive. When it snowed, he also cleaned the streets with the city grader. The first city hall was located at the northwest corner of 81st Street and University Blvd. 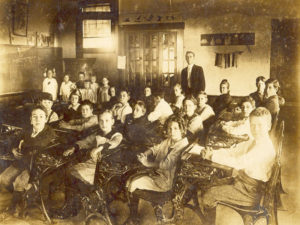 The area’s first school was built in 1848 at what is now 73rd Street and University. About 1900, the school was moved to Clive Road (86th Street where Ryan’s Steak House is now located). In 1962, the schools merged with the West Des Moines School District because tuition costs per student were becoming prohibitive.

One of the biggest factors for Clive’s future growth was the development of the Interstate highway system (1960s) that runs through Clive and the development of the I-235 Freeway (1970s) that passes through the neighboring city of West Des Moines to the south. Old “Clive Road” would become 86th Street which eventually became a major corridor connecting Clive with West Des Moines and Urbandale.

Annexations in recent years have added to the incorporated City of Clive, thus taking boundaries west and north to Waukee and Urbandale.

Today, Clive is a thriving community. Large and small business provide service and jobs.  The community is bound on all sides by other communities so that limits expansion.  There are still areas within the boundaries where business and homes can be built.  The street system connects all the suburbs and leads to Des Moines.  Trains no longer are available for passengers.  A utility train still does occasional pick up and delivery to the steel plant.

Waukee and West Des Moines schools serve our educational needs with the exception of one school remaining in Clive.  In 2016, Clive Community Services was launched to provide food, clothing and limited healthcare to low-income residents.

Clive History reaches back to indigenous people traveling along what is now named Walnut Creek. Clive was on a Stage Coach rout taking people to western towns leading eventually to Omaha. Settlers moved in from the east and started small farms. Coal mines dotted the area. When the huge Anderson farm was built commerce really picked up. With the train route moving farm goods to market and consumer good back added to the areas expansion.