The Swanson General Store renovation cost approximately $45,000. The addition had to be removed and replaced, the interior was gutted to remove walls that had been added, floors had to be replaced that had been destroyed by termites. When the contractor removed the 13 layers of wall paper in the main rooms, he could see exactly where the shelves had been in the store, so he built the shelves to match the original ones.

» Click on an image to enlarge and step through the slide show.

Some of the fondest memories of my childhood centered around this general store, listening to the many tales and stories told by the farmers as they sat around the big burning side heating stove in the winter.

This little general store that my mother operated in this small town of my childhood was the mainstream of our lives. About everything we ate, wore and owned came from it. All our family stories come from there, too, going back to our great grandparents time.

It was in the fall of 1911 my mother was left a widow with five small children, ages ranging from 5 months to 10 years. She left the farm near Grimes and built her home in Clive, with the help of many good friends and neighbors. It was this general store and the Post Office that she raised her family. Our home was very plain. No carpet on the floors. We lived in the upstairs. Only the living room was papered. The downstairs was used for the store and Post Office and general storage.

The outside of the store didn’t look like much, but when you opened the door and stepped inside, you were in another world. The first thing that you noticed was the wonderful smells hitting you at the same time — the smell of dry goods, cheese, pickles, spices, candy, herbs, and many more too numerous to mention.

On the porch was a variety of kegs and barrels and against the wall was a bench. This was a fine place for the community to gather on a summer evening and discuss the events of the day. They would usually start gathering early to claim their favorite seats. There was a kind of “picking order” when it came to who sat where and what they sat on. The first in the group had the only rocking chair. Others had a certain feed sack they used day after day. By doing so they had it molded in the right places to fit their back and rump. Most just used what was available to them — even the steps.

You might say it was the social meeting place of the small community. Some of the men smoked corn cob pipes, and some chewed tobacco or snuff. The women usually had their knitting or just visited. The younger ones always had their own evening of fun. To complete the evening, mother would get out a box of crackers and some cheese. I can see our guests cutting pieces of cheese with their pocket knives and popping it and a cracker in their mouths.

On the right, as you went in, was the huge glass candy case with a rounded top. Inside were so many different kinds of candy that it was hard for a child to make up his mind the kind he wanted. In those days, you could get a bag of candy for a nickel, and there was penny candy of many different kinds.

In the darkest corner, to keep from ripening too easily, was a large bunch of bananas suspended from the ceiling. One could get two or three for a dime.

Big thick “Big Chief” tablets were five cents, and pencils a penny apiece. Along the north wall was the dry goods shelf. It held materials that wore and wore, for the practical minded country people — ginghams, denim and chambray. Calico sunbonnets were made at home, costing about fifteen cents, and calico dress goods sold for ten cents a yard. Thread cost two spools for five cents.

The grocery department was the most flourishing. There were kegs and wood boxes full of dried beans, prunes, raisins, rice and assorted cookies. Molasses and vinegar were in barrels with a wooden spigot pounded into a bung hole. Also there was a barrel of brown sugar and crackers. All there were put into paper bags or bottles for the customer. Oleo was uncolored and cereals in the early days were usually oatmeal and rice. Later cornflakes and shredded wheat.

In the rear on a wire extended from wall to wall hung men’s work gloves, denim jackets, mackinaw coats, pants, caps, socks and long johns, which everyone wore in those days. Garden supplies as hoes, rakes, seeds, etc, were sold.

There were cookies on display in boxes with isinglass lids, so you could see what you were buying. You would tell mother what you wanted and she would swing the little lid back, reach in and put the kind and amount you wanted in a bag. The sponge cookie with the coconut topping was a real treat, as the Mary-Ann, and cookies flavored with ginger.

Our patent medicine department consisted of a Swamp Root and Lydia Pinkham’s, both so called tonics, Castoria, Doan’s Pills and aspirin.

My mother had the store and Post office from 1912 until 1929. One could mail a letter for two cents and a post card for a penny. The mail was sent out from Des Moines twice a day, morning and evening by train. As youngsters, it was our job to meet the mail train. Everyone in this small town walked in for their mail and to get the day’s gossip.

I remember there was one corner in the house that was called the cry corner. Any tears to be shed were shed in this corner. I imagine there are tear stains on the wall today if the wall was examined real close under the layers of wallpaper. To get me out of their way my older sisters and brother would stand me in this corner with a bottle of milk or water.

My mother was a good Christian and a good loving, kind woman whom everyone admired for her courage. She never complained because she knew she had a job to do in raising and educating her family. Sometimes I wonder how she stood up under the long hours and seemingly insurmountable problems.

She’s watched Clive grow from only a dozen homes…

The biggest commodities at Clive these days are handsome new homes and dozens of school children. Half a century ago when Mrs. Scennia Swanson, 82, came to Clive from Knoxville, major commodities were cherries, other fruit, vegetables, grain and coal.

There wasn’t a car in town, but both passenger and freight trains clattered by on the Milwaukee railroad tracks at a rate of one every half hour. Now there are perhaps three trains a day.

Today the school-age population is increasing so rapidly the modern new school building with space for more than 660 children isn’t big enough. School officials are thinking of building the first wing of a new building.

Since 1912, Mrs. Swanson has lived in the same house (NW 86th Street and University Boulevard). Her husband died that year after having typhoid fever.

Mrs. Swanson was left with five small children. Friends and neighbors helped her devise a way to support her family. The solution was a large frame building with a general store downstairs and living quarters upstairs.

She also qualified to operate the town’s post office. During lulls in business, Mrs. Swanson cooked, made all of the youngsters’ clothes and canned fruit and vegetables.

She operated the store & post office for 21 years — until the five children had completed high school (Post Office until 1929). All five graduated from East High School in Des Moines.

When the three oldest children were in school, Roosevelt High hadn’t been built. Closest transportation to East High was the streetcar. It made a turn around at 49th Street and University Avenue. The children walked 3 miles just to get to a street car, unless they were lucky enough to hitch a ride.

After the children graduated from high school and obtain jobs in Des Moines, they persuaded their mother to give up the store and post office. 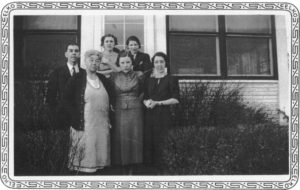 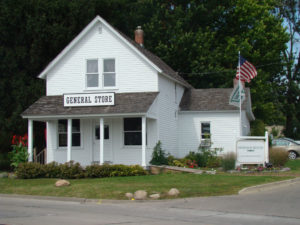