You are here: Home / Esther Miller Stories / Living off the Land 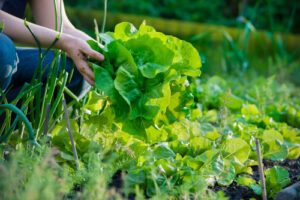 When my parents were growing up, in the early part of the 20th century, many people still had gardens even if they lived in the city. Both Mom and Dad grew up very poor and knew that the best food was what you grew yourself or found growing wild. Stores didn’t have refrigeration and there weren’t trucks to haul food from one part of the country to another, so if you wanted lettuce or corn or juicy, ripe tomatoes you had to grow them yourself.

Living in that old house let us live off the land and eat better than we’d ever been able to eat before. We had two gardens, one that was kind of big that my dad plowed with a hand plow every spring and helped my brother and me plant and the other was a really big garden that he and mother planted every spring. David and I grew radishes and onions and lettuce and other easy crops and learned to tell which were garden plants and which were weeds. Mom and Dad planted sweet corn and tomatoes and squash and green beans and all sorts of other vegetables. 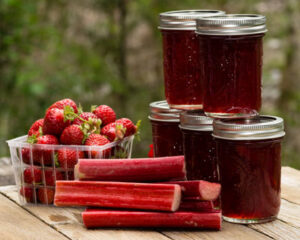 But what was really crazy was the wild food that grew all around us. There was a fence at the bottom of the front yard that was covered with wild grapes. The grapes were really small, about the size of peas, and really sour! We’d pick all the grapes the birds didn’t eat and then Mom would make Pillowcase and Clothesline jelly. What??? She’d cook all the grapes until the skins burst and then she’d put the hot grapes into an old pillow case, tie a short piece of clothesline around the top of the pillow case, and hang the whole mess from a cabinet handle and let the juice drip into a big bowl. Then she’d add sugar to the grape juice…lots because they were so sour…and make beautifully sparkling clear grape jelly. After she had made one or two batches of the really clear kind (to give as gifts or to serve when we had company), she would squeeze the pillowcase to get more juice out. This would have little tiny bits of grape pulp in it, so it wasn’t as clear but the jelly it made tasted just as good. It just wasn’t quite as pretty.

All along the railroad track and most everywhere, there were elderberries. They make purple berries too, only they are in flat clusters at the tops of the stems. Mom would make elderberry jelly the same way she made grape jelly.

On the west side of the railroad track, quite a ways past our house, was a little hill that was absolutely covered with wild raspberries that got ripe about the same time school was out for the summer. We’d hike up the railroad track with buckets and pick raspberries. I’d bring back a big old bucket full and my brother David would bring back a few. He’d also be wearing a stained shirt with juice dripping off his chin. Guess which one of us really liked raspberries and which one didn’t? 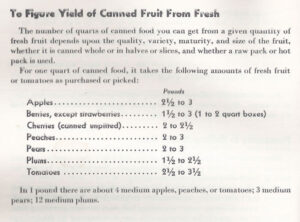 To Figure Yield of Canned Fruit from Fresh.

There were also gooseberries along the track, but Dad was the only one who liked them. I think one time we picked enough that Mom made a gooseberry pie for him. There were a few wild strawberries, too, but the birds must have gotten them. I wasn’t too worried, because I love the taste of strawberries but I didn’t like the feel of them in my mouth. (I learned to love them after I was grown up and I’ve eaten plenty ever since!)

Then there were the pears. Somebody must have planted about eight pear trees in a couple of rows way out in the pasture very long ago. We never did anything to those pears except pick them when they were almost ripe. Mom would put them in the cellar and let them finish ripening in the dark so they didn’t get crystals in them, then she and I would can quarts and quarts of pears. Some were so big we had to cut them in quarters just to get them in a wide-mouth canning jar! We ate canned pears all winter long.

There were two apple trees in the same pasture as the pear trees and we didn’t do anything to those apples, either. So, they got lots of worms. But we didn’t have much money and Mom sure wasn’t going to waste free food, so we would pick all those apples. Gobs and gobs of them. We’d peel them and cut out the cores and the wormy spots and make applesauce. I wish I knew how my mom made her applesauce because it was the best in the world. I have made lots of applesauce myself but never got it to turn out as good as hers. She also cooked down some of the apples and made jelly from the juice.

The best jellies she made were the Mystery Jellies. A little bit of grape juice left over? Add a little apple juice. Or somebody gave us some cherries and she’d add cherry juice to the apple juice. She always managed to make really good things out of whatever she could find.

Note: This is the tenth of 11 stories written by Esther Hastings Miller.  Follow along as she shares her precious memories of growing up in Clive, Iowa.