You are here: Home / Esther Miller Stories / The Old House in Clive

I had just turned eleven when we moved to Clive, in early December of 1957. We moved into an old house at the end of the dirt road that is now Swanson Blvd. In those days it was simply the dirt road extension of University and our address was P.O. Box 11, Clive, Iowa.

The post office was a building so small that if more than three or four people went in to get mail, somebody had to come out before anyone else could go in. It seems to me that it was on 85th street, a block or two north of University.

The house wasn’t really at the end of the road. The road crossed the railroad track, as it does today, and went on down to the steel plant but our driveway came just before the track and followed its curve. The house sat at the top of the hill, farther up than the current houses sit and it faced the road. There were no houses behind it all the way to Hickman Rd.

I wasn’t curious when I lived there but later as I remember the house and look at the pictures, I suspect that the house first faced west. It would have been two rooms downstairs and a front porch plus one large bedroom upstairs. By the time we lived there, the porch had been enclosed but the floor slanted and there was no heat there, so we just used it for storage. A large kitchen with a walk-in pantry had been added to the back of the existing house. It was large enough that we had a huge round oak table in one corner of the kitchen and it didn’t get in the way at all. A door led to a landing halfway to the basement. A right turn took you down to the basement or if you continued straight, you’d go up two or three steps again and out the back door. 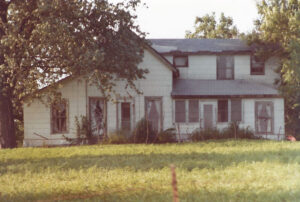 In the basement was a coal bin, served by a coal chute on what was by then a concrete front porch on the front of the house. The coal truck would dump two or three tons of coal into the chute at a time. Three tons pretty well filled that bin. We then shoveled coal into the stoker, a small metal bin with an auger in the bottom which fed coal to the furnace which heated a jacket of water that circulated through the radiators in the kitchen, living room, and downstairs bedroom. A register in the living room floor let any warm air in the living room heat the large upstairs bedroom…mine…which means my room was COLD in the winter. So cold that if it snowed with a strong wind behind it, fine snow would blow in around the windows and pile up on the floor where it stayed all night. I had lots of blankets on my bed!

A second bedroom had been added over the kitchen and the only bathroom in the house was through that small bedroom. The toilet had a tank that scared me half to death. It hung from the ceiling and overflowed sometimes. Made me hate going in there.

Tacked onto the back of the kitchen was another unheated room which may have been a garage at one time. It was our laundry room and another storage room and I don’t remember much about it. It did have an outside door. Outside that door was a stand-alone building which Mother said might have been a summer kitchen at one time but we were forbidden to explore it and being the good kid I was, I never poked around in there. I think it had a chimney, so a summer kitchen would have been feasible.

We lived in that house for two and a half years, the best years of my childhood. My mother hated the place because it was so far from neighbors. There were a few old houses on Harbach Drive but she didn’t ever walk over there. She didn’t drive and Dad worked nights, so she was stuck. My brother and I loved playing all over the property and we all agreed the best part was the cheap rent…only $50 a month. Many of my favorite stories from my childhood took place there, so read along with me as I remember my time in Clive.

Note: This is the first of 11 stories written by Esther Hastings Miller.  Follow along as she shares her precious memories of growing up in Clive, Iowa.