You are here: Home / Esther Miller Stories / Visitors – Some Welcome, Some Not

We had a number of visitors at the old house, most of them family and friends who were always welcome. The huge round oak table in the kitchen was filled with relatives for Thanksgiving dinner, the best holiday dinners ever!

Not all visitors were so welcome, however. One that managed to visit most folks the winter of either 1958 or 1959 was a virulent strain of Hong Kong flu. Both my parents and my brother got it and I figured I’d escaped, but once they started feeling better, I got it along with a high fever. The monster that appeared at my doorway each time I tried to sleep was a figment of feverish hallucination, but my 12-year-old brain didn’t quite understand that.

When I was finally feeling slightly better, I awoke one afternoon to strange voices downstairs. I managed to get myself down there, only to find a “cute boy” (aren’t they all cute when you’re 12??) talking to my dad. It turned out he had spent the night in our barn after running away from the prison farm, a low-security facility where Living History Farms is now. I don’t know how old he was or if they had a juvenile facility there or what. He was one of at least two who spent the night in our barn after escaping from the farm.

One visitor I wish I knew more about was an old man. He came one day in a car driven by a younger relative of his and said his father had built the house and that he was born there sometime later. The man was about 80, so if he was born there, the house was built before 1880. If someone knows how to research land records, or if I can find the appropriate records online, I’d love to know more about that house and the family that built it. 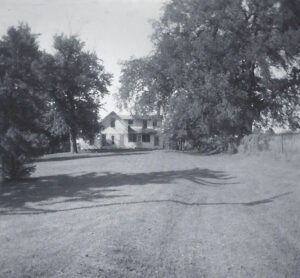 Often when we came home in the evening there would be a car parked in our driveway. The house wasn’t visible at night, there were trees on either side of the driveway, and it made a dandy lovers’ lane. Dad would pull up behind the car, the driver would freak out and drive away, only to find himself in our back yard. He had no choice but to turn around and come back down. Any sensible man would have simply backed up and let them pass but sensibility and different standards of conduct were rare concepts for my dad and he would by this time have gone to the house to call poor Mr. Lundberg who was justice of the peace and maybe a sheriff’s deputy or maybe just what passed as local law enforcement. That good man would come out and make Dad get out of the way after talking with the driver of the parked car. Justice was done, Dad got over his sputtering anger at the ‘immorality of young people these days,’ and all was well again.

One surprise visitor early one evening was a bona fide Sheriff’s deputy who served my mother with an eviction notice. We were having a church progressive dinner party that night and we arrived shortly after the deputy left to find Mother on the verge of tears. The property had been sold and we had thirty days to leave. Mom wasn’t feeling good that night and soon after the party went to bed. She became weaker and weaker and terribly sick. Mother was NEVER sick. The whole world was turning the wrong way. How could Mom be sick? Finally, she called a doctor. Little money and no insurance meant no doctor unless you absolutely couldn’t figure out for yourself how to get well. A shot and some pills and lots of water and rest finally made the difference and very slowly Mom returned to health. 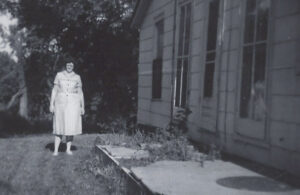 Her return to health was not fast enough for one more surprise visitor, who showed up about a week before we were supposed to be out of the house. We had done nothing about moving because Mom was sick. How can anyone do anything when Mom is sick? The visitor was the new owner of the property and he was surprised and angry that we weren’t already out of his house. He informed Mother that his family was moving in on the Saturday when the thirty days were up, and we’d better be out of his way. He came by every afternoon to see how we were progressing toward that goal, always after Dad had left for work and before we got home from school. Mom would be in tears after his visits.

The best visitors turned out to be almost residents. The barn was rented to a family over on Buffalo Rd. They had two daughters, one in my class and one a year or two older. They started out with three horses. A trip to Mexico added some miniature horses to the herd, a burro or two, and the world’s most beautiful and absolutely foulest-tempered white Shetland stallion. The animals stayed for two years and the older daughter and I became fast friends, hanging out in the barn, talking about boys, listening to her transistor radio, and taking care of the horses. I rarely got to ride but I loved those horses like family.

Small wonder that my years in that house were my favorite childhood years!

Note: This is the eighth of 11 stories written by Esther Hastings Miller.  Follow along as she shares her precious memories of growing up in Clive, Iowa. 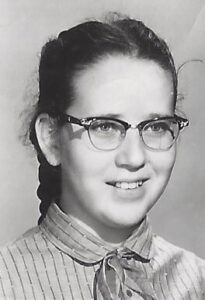 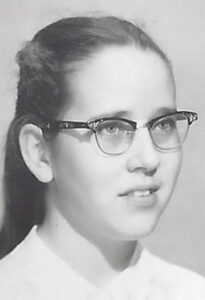