You are here: Home / Esther Miller Stories / Radio in the Winter

I’ve already mentioned how cold it would get in that old house where we lived. My bedroom was the coldest in the house and all winter I was buried under plenty of heavy blankets and quilts. I went to bed early to stay warm and to listen to my radio.

My radio was AM only, as all radios were then. It was a Zenith “portable” my parents had bought when I was little, which meant it was not a piece of furniture. It still had to be plugged in and weighed a few pounds. There were tubes in it which had to warm up before any sound came out and it had a loop of wire on the inside of the back panel which served as an antenna. That radio warmed a spot on the edge of my bed and I snuggled in close, partly for the warmth and mostly so I could hear it. I didn’t dare turn it up very loud or Mom would know I wasn’t asleep and I was probably listening to that evil rock and roll. That music was the work of the devil – all the old folks knew that. 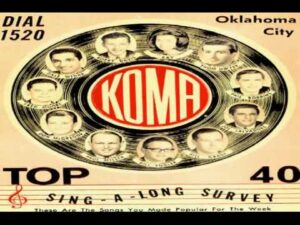 I listened to all the rock and roll stations: KIOA and KSO in Des Moines, KCMO in Kansas City, WLS in Chicago, KOMA in Oklahoma City, KOA in Denver, KOB in Albuquerque, and WWL in New Orleans. Those were my regulars. On winter nights, each of those stations came in loud and clear. There were others and sometimes I’d slowly turn the dial, listening to the weak stations fade in and out. One time I even managed to get a Boston station. Oh, and there was the station in Del Rio, TX. Anybody who listened to radio in those days can remember how the announcer drew out the DELLL RIOOO, TEXAS. The reason everybody in the Midwest and into Canada could hear Del Rio, TX was because its transmitter was across the border in Mexico and was running 100,000 watts, twice the legal power of US stations.

One night I was listening to WWL in New Orleans and it didn’t play the national anthem and go off the air at midnight like any sensible station would. Instead it had some really loud music I’d never heard before and then some man was yelling into the microphone and I couldn’t understand a word he said. I listened to this several nights in a row and suddenly realized what he was saying was “Señoras y Señores.” OMIGOSH…he’s saying “Ladies and Gentlemen.” I knew there were other languages, but I hadn’t figured out yet that everybody says the same things with just different words. What an eye-opening moment!

So, then I listened closer and figured out they were reading the news. Eisenhower and Khruschev sound pretty much the same in English and Spanish. I eventually wrote to the radio station and got a letter back explaining that I was hearing Radio Free Cuba, just after Castro had taken power there. The most troubling part of that news was that there were other stations beaming Radio Free Cuba to the island nation, but they weren’t on my dial! They were shortwave. I had no idea what shortwave was and nobody I could ask. So, for years I was just incensed that there could be radio stations I couldn’t hear. It just wasn’t fair!

Maybe there is something to be said for boredom and lack of heat. Those long winter nights in that cold bedroom led me to a hobby few women ever consider, much less enjoy. I’ve been a licensed amateur radio operator for over 30 years and I do know what shortwave is now. And for the record, I still have the Zenith radio. Of course. Every ham has the radio that got them hooked.

Note: This is the fifth of 11 stories written by Esther Hastings Miller.  Follow along as she shares her precious memories of growing up in Clive, Iowa.